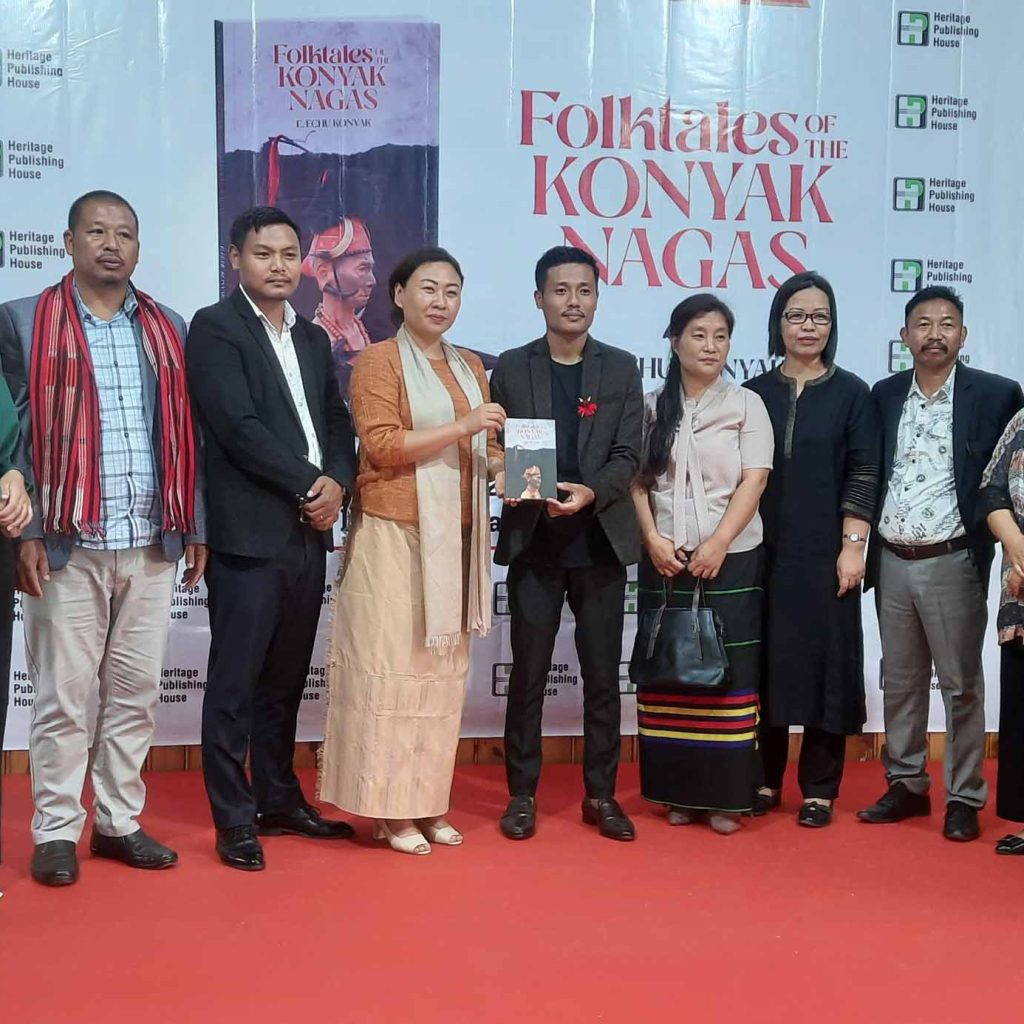 A book ‘Folktales of the Konyak Nagas’ released in Kohima

Our correspondent
Kohima, May 28 (EMN): A book “Folktales of the Konyak Nagas”, which is a collection of Konyak folklores with illustrations, and written by E Echu Konyak was published in Kohima by Rajya Sabha MP S Phangnon Konyak on Saturday.

As a child, growing up in the village (Jakphang), Echu was fascinated by the folk tales and stories that were told in the circles of his friends whenever they sat around a campfire. It was on the spot that he had the idea of ​​documenting endangered folklore. Over time, he pursued higher education and left the village and adopted a city life, but the “burden” of writing it, as he described it, was still there.

Echu, who is currently studying MTh at UTC Bangalore, is said to have started writing his first book about 15 years ago while at university. Years later, when he sat down to materialize his first book, he couldn’t remember some of the stories told from childhood. Last year, he went to do extensive research, where he interacted and interviewed people from village to village in Mon district for the final result of his book. He hoped that readers would be enriched by reading the book.

“Our ancestors passed on our rich culture and traditions to us. Now it is our responsibility as a new generation to follow in their footsteps and keep their culture alive,” he said, adding that the book should celebrate and preserve the customs and traditions passed down from the ancestors.

While pointing out the differences in views between “insiders and outsiders”, MP S Phangnon Konyak encouraged locals to write about their own stories, especially for the future generation.

“If this is not done, what are we going to give to our future generation?” she asked and urged everyone to make a collective effort.

“If efforts are not made now to document them, others (outsiders) will continue to write about them. Unless we tell our stories ourselves, they will not be represented as we deserve,” said Dr. Tzudir.

“For Nagas, writing about us begins with what others write about us. But an insider’s perspective is very important. We need to write to be understood, to speak (in writing) to be heard and to read to grow”. In this generation where our roots are rapidly disappearing, if we don’t take care of our stories, we will be in big trouble.”

Independent researcher and freelance editor, Dr. Vizovono Elizabeth, remarked that the book depicts a world of its own. She said the stories transport readers to the time when animal, man and spirit live in close proximity. It consisted of 28 oral tales containing ancient wisdom.

Echoing the author’s words, she said that many stories could not be included in the book because there were no elders present to confirm them in some villages.

“If we don’t document them now, we will lose our culture and our identity,” she said. She further observed the book as a “delightful read”.

The book was illustrated by Arien Jamir and Alee Sophia.