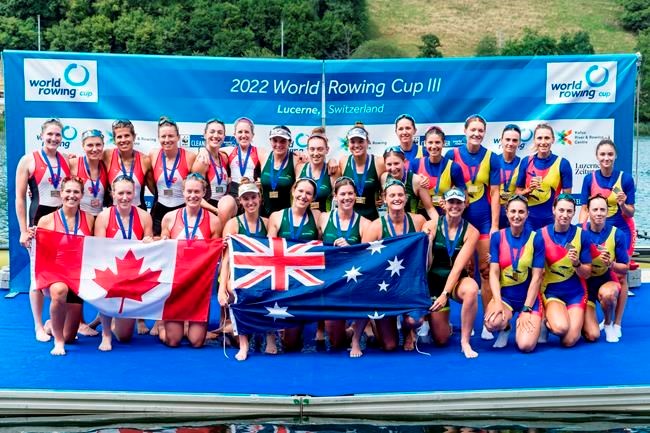 The Canadians finished just ahead of third-placed Romania (6:08.19), but well behind the gold medal-winning Australians (6:06:51).

Veterans Gabrielle Smith and Jessica Sevick, who finished sixth in the women’s double sculls at the Tokyo Olympics, also shared the victory after slipping into the team of eight this season.

“It’s a different challenge trying to run with nine people rather than two, but it was super fun to learn from the other women and grow through the different strengths of the boat,” Smith said. “The willingness within this crew to learn, to be open and to adapt together is our greatest strength.

Three other Canadian crews also qualified for the A finals on Sunday. Trevor Jones finished fourth in the men’s singles final, while the men’s eight and women’s pair crews both finished sixth.

The women’s pair was made up of two Under-23 athletes, Maya Meschkuleit and Leia Till, who will represent Canada at the Under-23 World Championships in Italy later this month.

“Getting the invitation to race at World Cup 3 was hugely exciting, but making the A final in our first senior event was an absolute honour,” said Meschkuleit.

This report from The Canadian Press was first published on July 10, 2022.