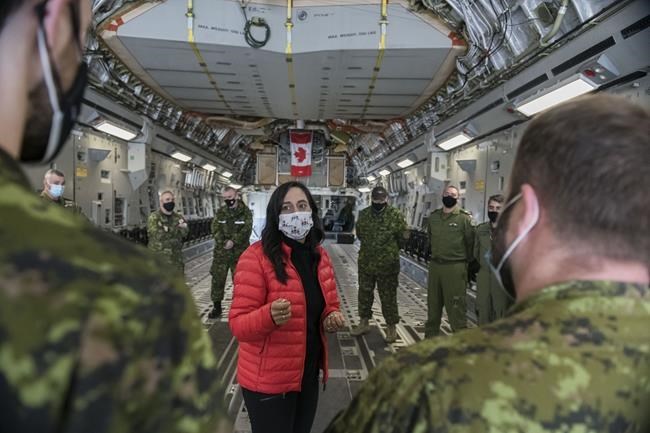 OTTAWA — Members of the Canadian Armed Forces will leave an Ontario military base in the coming days to help with the care, coordination and resettlement of Ukrainian refugees in Poland, including some who will come to Canada.

OTTAWA — Members of the Canadian Armed Forces will leave an Ontario military base in the coming days to help with the care, coordination and resettlement of Ukrainian refugees in Poland, including some who will come to Canada.

Defense Minister Anita Anand announced the deployment of up to 150 troops from Canadian Forces Base Trenton on Thursday, saying troops from Edmonton and Kingston “will support Poland’s efforts to support and care for Ukrainians fleeing violence”.

More than 2.6 million Ukrainians have fled to Poland since Russian troops first entered Ukraine on February 24, sparking what many consider the largest and most devastating conflict in Europe since World War II.

More than two million others have fled to other neighboring countries.

The majority of deployed troops will head to reception centers across Poland to help treat and register Ukrainian refugees, Anand said. Another group is sent to help coordinate international aid efforts.

“And third, we will assist Immigration, Refugees and Citizenship Canada by acting as liaison with the Polish Defense Forces as IRCC works to ensure that thousands more Ukrainians can continue to resettle in this country,” added Anand. .

The federal government decided to fast-track immigration applications from Ukraine and created a special program allowing Ukrainian citizens and their families to come to Canada and work or study for three years.

Canada has deployed hundreds more troops to Eastern Europe since the Russian invasion as the NATO military alliance seeks to both support Ukraine and prevent the conflict from turning into a a larger war.

Asked at a separate event Thursday about the likelihood of a wider conflict, Canada’s top military commander acknowledged it was “one of the questions that keeps me up at night.”

“We are dealing with an unpredictable actor,” Chief of the Defense Staff General Wayne Eyre said at a breakfast hosted by Ottawa Mayor Jim Watson. “Could it expand in the future? I do not know. But my heart tells me that we must be ready.

Canada currently has approximately 1,375 military personnel in Europe, including nearly 700 troops leading a NATO battle group in Latvia, 500 sailors on frigates in the Mediterranean and North Atlantic, and approximately 140 crew attached to a surveillance plane.

The Canadian Armed Forces also previously had 260 military trainers in Poland after their evacuation from Ukraine shortly before Russia launched its invasion.

The trainers provided humanitarian aid in Poland during the first weeks of the conflict, but have since been relocated to Canada on what the army says is a temporary base.

The Kremlin’s false narratives include doctored images of members of the Canadian Armed Forces in Ukraine and false allegations that Canadian soldiers are committing war crimes, CSE said.

Defense Department spokesman Daniel Le Bouthillier said Thursday that there were no Canadian troops in Ukraine.

Conservative immigration critic Jasraj Singh Hallan has accused the Liberals of falling behind when it comes to helping Ukrainian refugees by refusing opposition demands to drop demands Canada regarding visas.

“Canada should not have waited until the 50th day of the war in Ukraine to bring additional resources to Eastern Europe to help our Ukrainian friends and family flee the conflict,” Hallan added in a statement. .

Since the start of the war, Canada has sanctioned hundreds of Russian political and business leaders and asked the International Criminal Court to investigate the country for war crimes and crimes against humanity.

The government has also provided millions of dollars in loans to the Ukrainian government as well as weapons and equipment for its military, with the federal budget committing another $500 million in lethal aid in the coming weeks or months.

Anand said the government was discussing with companies the purchase of military equipment for Ukraine, citing the purchase and supply of precision cameras for Ukrainian drones last month as an example of the types of contracts being considered.

“Ukraine directly asked us to provide cameras for these drones,” she said. “Within days we had a contract in place and cameras sent to Ukraine. This is the type of effort that we will continue to make.

Canada is also working with NATO allies to potentially pool aid, said Anand, who noted that the UK hosted a conference late last month focused on providing heavy weapons to Ukraine and the training and support needed to use them.

This report from The Canadian Press was first published on April 14, 2022.

Note to readers: This is a corrected story. A previous version reported that members of the Canadian Armed Forces were to leave for Poland on Thursday. In fact, their departure is expected in the next few days.

3 easy ways to clean a mirror

At Passover, a new cry of redemption | News, Sports, Jobs