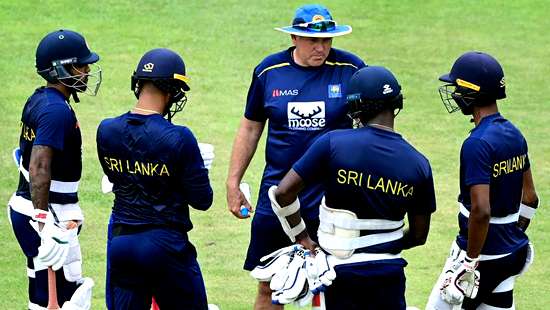 While Sri Lanka’s struggle as a nation seems endless, its cricket team is certainly ending its slump with consistent performances.

It’s been a pretty amazing week for the island nation since that stunning shot from captain Dasun Shanaka to a miraculous victory in the third T20 at Pallekele.

Since then, a number of players have contributed immensely, starting with Wanindu Hasaranga who nearly beat Sri Lanka to victory in the first ODI on essentially one leg, and then the ultimate showman Chamika Karunaratne living up to expectations with a display truly energetic bowling, which saw them defending a sub-par score – the most recent feats of Pathum Nissanka and Kusal Mendis in chasing a record score to smash Premadasa’s hoodoo.

Perhaps it’s this quiet nature of Chris Silverwood that may not have earned him well-deserved accolades. The former England manager certainly doesn’t jump into the dressing room like his predecessor Mickey Arthur, but the 47-year-old has certainly taken the team to the next level. Make no mistake, he inherited a pretty good squad that was groomed by Arthur under heavy criticism. Many thought Pathum Nissanka was just a red-ball cricketer, but Arthur always saw the right-hander as a three-format player. So there is no doubt that he had given so much to Sri Lankan cricket.

However, under Silverwood, Sri Lanka seem tactically far superior. By no means does that mean Arthur had no tactics, but the players seem to be executing the plans regularly under Silverwood. From bouncing David Warner to challenging Glen Maxwell to get over extra cover players from left arm spinner Dunith Wellalage, Sri Lanka looked like a team well prepared for an international game of cricket.

In the second ODI, when Sri Lanka persisted with Chamika Karunaratne and Dushmatha Chameera towards the end despite rotation options, it looked like anti-cricket or felony cricket, but they knew exactly what they were were doing and Silverwood should be credited. .

In batting terms, one of the most noticeable improvements has to be the aggression against the fifth or sixth bowler. Marnus Labuschagne is a reasonable bowler – he did pretty well in the Big Bash and now with the Doosra banned every leg spinner is somewhat special, but Sri Lanka beat him quite aggressively in this massive chase of 292 which was a key element in this win considering Aiden Markram was made to look like African Murali by Sri Lankan batsmen last year.

Although half the squad from both teams watched nearly with injuries in what has been a very competitive series, there are more crickets to come. Regardless of the results, Sri Lanka have made brilliant progress under Silverwood.

The boss of the SLR has experienced a roller coaster of a mandate. As soon as it came to power, Sri Lanka was hit with Covid and there was hardly any rugby. Former sports minister Namal Rajapaksa clearly didn’t like him and as a result he was apparently rugby’s premier sponsor at the time. But then he chose to play hardball and brought in a different sponsor for the national team and out of the blue – a world-class coach in Ben Gollings. He ran the league tournament without a sponsor for weeks and in the meantime made Namal Rajapaksa’s last act as sports minister to suspend SLR look pretty stupid.

Now, of course, Illyas came under fire from left to right and from the center, so it would be interesting to see his next move as no one is finished until he is proven guilty. Prasanna Ranatunga, for example, thinks people talking about his suspended two-year prison sentence are “ignorant” as if the court had found him not guilty – and the right to appeal makes that perfectly fine.

However, it has to be said that dragging Illyas’ family into this seesaw battle was a bit of a low blow and an absolute disgrace.