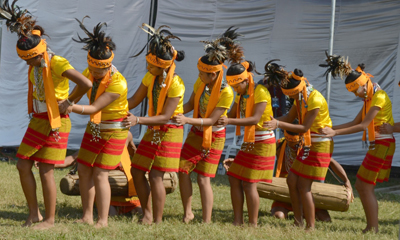 Dimapur, May 26 (EMN): The Nagaland Garo Tribal Council (NGTC) has expressed its displeasure and resentment at not being invited to the recent “Consultative Meeting on Documenting Naga Traditional Dress and Patterns” in Kohima, where tribal hohos (recognized tribes) and Nagaland stakeholders were invited.

In a press release, the supreme tribal body of the Garo community said it was “very discouraging and painful” that a recognized tribe in Nagaland was not invited to such an important state-level meeting.

He alleged that a reminder letter was mailed to the commissioner and secretary to include the Garo tribe for May 19e event and the same was copied to their constituency MP and CMO but their prayers fell on deaf ears unanswered till date.

“Despite this, our leaders opted to attend the meeting uninvited, hoping for a positive outcome, but we were surprised to face more embarrassment. All sitting arrangements were made according to the wise tribe, where our tribe was not given any seats,” the press release read.

“This kind of treatment really hurts our feelings, which we did not expect. It is an act of injustice and total discrimination. We are totally appalled and feel rejected by this ignorance and neglect, where a tribe recognized as the Garo has been left out and sidelined from this crucial meeting,” he added.

The NGTC said they were deeply hurt and felt alienated in their own country. Stating that the Garos are often overlooked on many occasions, he said the tribe’s name “is not found on many government websites and portals, which is unacceptable.”

“Relevant departments should do what is necessary to give us our rights, giving us equal opportunities to participate, prosper and progress, with all tribes in our benevolent state of Nagaland,” he said.

“The Garo tribe is undoubtedly a minority tribe and one of the most backward tribes in the state; we have no representative of our own to express our grievances but there is no minority and no majority in the eyes of God; being a Christian state, we believe that the Almighty Lord will give our rulers the sense of wisdom to love one another and live equally in true Christian spirit,” he said. added.

He went on to say that “the Garos of Nagaland have been living in Dimapur since time immemorial and their ancestors were part of the ancient kingdom of Dimapur”.

Recounting its migration to the state, the NGTC said majority of the Garos settled in and around the foothills of Samaguting (present-day Chumoukedima) before some of them moved to present-day Darogapathar in 1811.

“Present Dimapur Airport was previously a paddy field of our ancestors under a Garovillage named ‘Ikranigaon’ but during World War II it was given to the Allied forces for the construction of the airport,” he said. .

Maintaining the community Garo had cooperated with the Nagaland government and civil societies, and even helped the Naga National Movement, he said he used to enjoy equal rights like all other recognized tribes in the state but “Over time, our tribe slowly began to decline in importance and lose its status”.

While saying government departments had started to question their status as an indigenous and scheduled tribe, he said “we will continue to stand up for our rights and the future generation” despite being a small tribe.