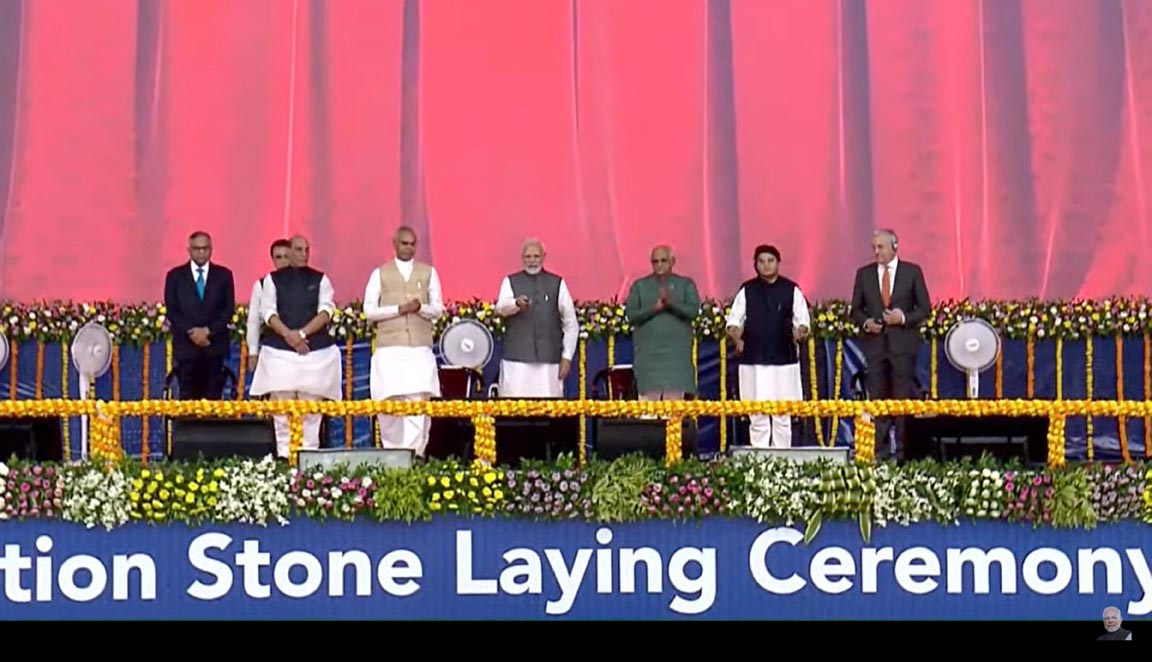 Modi said India is experiencing rapid economic growth, including in manufacturing, as his government’s policies are “stable, predictable and futuristic”.

“India today is working with a new mindset and a new work culture,” he said during his speech at the ceremony in the Gujarat city.

He said India with its “Make-in-India” and “Make-for-World” approach is further enhancing its strength and the country has become a major manufacturing hub globally.

The prime minister said manufacturing C295 aircraft in Vadodara will not only strengthen the military but also create an aerospace ecosystem.

Defense Minister Rajnath Singh described the occasion as a milestone in India’s quest to become self-sufficient in defence.

The plane will be produced by a consortium made up of major European aerospace company Airbus and the Tata Group.

This is the first such project in which a military aircraft will be manufactured in India by a private company.

The manufacturing unit will also handle the export of the first transport aircraft as well as additional orders from the Indian Air Force.

In September last year, India reached an INR 21,935 crore deal with Airbus Defense and Space for the purchase of 56 C-295 jets to replace the IAF’s aging Avro-748 jets which are entered service in the early 1960s.

Under the agreement, Airbus will deliver the first 16 aircraft in fly-away condition from its final assembly line in Seville, Spain, within four years and the next 40 aircraft will be manufactured by Tata. Advanced Systems Ltd (TASL) in India as part of an industrial partnership between the two companies.

The 16 flying aircraft are expected to be delivered to the IAF between September 2023 and August 2025.

The first aircraft made in India will roll out of the manufacturing plant in September 2026 and the remaining 39 are to be produced by August 2031.

IAF officials said the C-295 aircraft would be able to operate from advanced landing fields (ALGs) and even unprepared runways.

It is also the first time that the C-295 aircraft will be manufactured outside of Europe.

The 56 aircraft will be equipped with an indigenous electronic warfare suite to be developed by state-owned Bharat Electronics Ltd and Bharat Dynamics Limited.

After the completion of the delivery of 56 aircraft to the IAF, Airbus Defense and Space will be allowed to sell the Indian-made aircraft to civilian operators and export them to countries authorized by the Indian government.

Three days ago, Defense Secretary Ajay Kumar said the plane’s indigenous content would be the highest ever in India and that 96% of the work done by Airbus in Spain to produce the plane would be performed in the Vadodara manufacturing unit.

The C-295MW is a 5-10 ton capacity transport aircraft with contemporary technology. The plane has a maximum speed of 480 km/h.

It has a rear ramp door for quick reaction and dropping of troops and cargo. Short take-off and landing from semi-prepared surfaces is another of its characteristics.

The aircraft is intended to bolster the logistics capabilities of the IAF.

Officials said the project provides a unique opportunity for the Indian private sector to enter the technology-intensive and highly competitive aviation industry.

The Ministry of Defense said that the manufacture of more than 13,400 spare parts, 4,600 sub-assemblies and the seven major component assemblies of the aircraft will be undertaken in India.

He said various systems such as engines, landing gear and avionics will be supplied by Airbus Defense and Space and integrated into the aircraft by the TATA consortium.

With a proven ability to operate from short or unprepared airstrips, the C-295 is used for tactical transport of up to 71 troops or 50 paratroopers, and for logistics operations to locations that are not not accessible to today’s heavier aircraft.

The aircraft can drop paratroopers and payloads, and also be used for medevac or medical evacuations.

The aircraft is capable of performing special missions as well as disaster response and maritime patrol missions.

The project is expected to directly generate 600 highly skilled jobs, more than 3,000 indirect jobs and 3,000 additional employment opportunities for medium skills with more than 42.5 lakh working hours in the aerospace and manufacturing sector. defense.

Nearly 240 engineers will be trained at the Airbus site in Spain for the project.

CASAJ will celebrate its silver jubilee on November 18