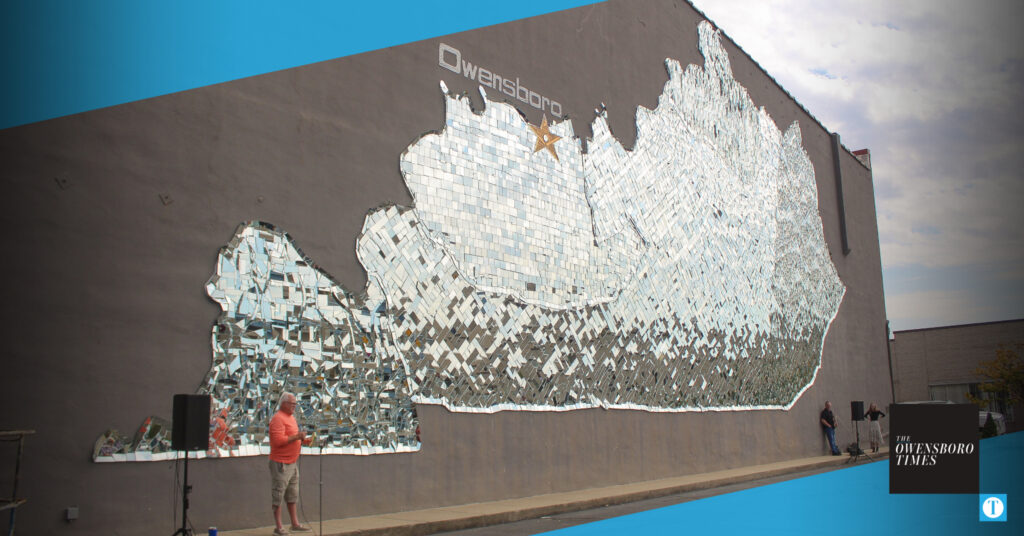 “I consider it my Sistine Chapel,” Bielefeld said.

Visit Owensboro President and CEO Mark Calitri said the mural is truly unique among cities in the Commonwealth and even the country.

“It sets us apart and gives visitors something to experience,” Calitri said.

The original mosaic – constructed to look like a map of Kentucky – was created by Bielefeld 40 years ago. Over time, a chemical reaction between the silver and the glue used to put the mosaic together caused pieces of the mural to break and fall off.

The restoration began in September 2019 and was expected to last 4 months. Funding and winter caused initial delays, then the pandemic prevented Bielefeld from accepting volunteers to help place, lift and glue the pieces of glass together.

Working alone this time around, Bielefeld previously said the mural had become a passion project for him.

He said the glass facility was lonely at times, but said several people constantly came to talk to him and give him company.

Mayor Tom Watson noted that the mural is a primary reflection of community members wanting to engage in a project without municipal authorities interfering.

All six geographic regions of Kentucky—Mountain, Knobs, Bluegrass, Pennyrile, Western Coalfield, and Purchase—are represented on the mosaic, each represented in its own way by specific shapes and orientations of each piece of glass. There is also a large glass star representing Owensboro.

The mosaic is located on the Frantz Building Services Building at 319 E. Second Street and spans 110 feet wide and 43 feet high.