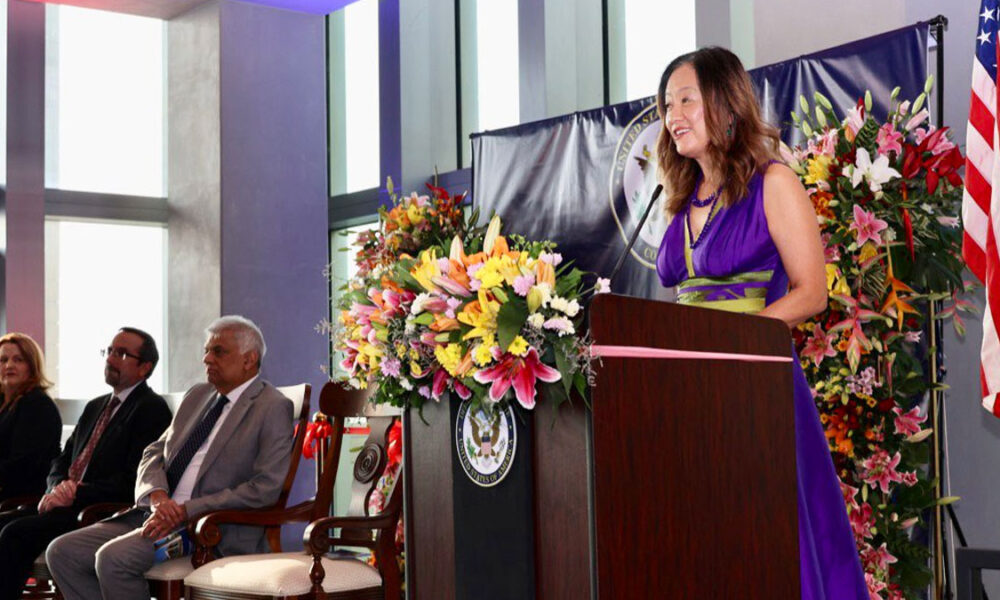 Opening of the new US Embassy in Colombo (Photo) – Sri Lanka Mirror – Right to Know. power to change

Below is the full statement released by the US Embassy in Sri Lanka.

Colombo, October 28, 2022: As part of a celebration of more than 70 years of friendship, partnership, and bilateral relations between the United States and Sri Lanka, the Honorable President Ranil Wickremesinghe, Ambassador of United States in Sri Lanka Julie Chung and U.S. Department of State Under Secretary for Management John Bass officially opened the new U.S. Embassy on Galle Road today at a celebratory event attended by officials and private citizens of both countries.

“It was a great honor to celebrate our new embassy in the presence of the President of Sri Lanka, honored guests and colleagues,” US Ambassador Chung said. “We have had an embassy in Colombo since Sri Lanka’s independence in 1948, and the new campus symbolizes our enduring partnership with Sri Lanka. Americans and Sri Lankans worked together to build this state-of-the-art facility that embodies respect for the environment and appreciation for Sri Lankan architectural, cultural and artistic themes. We are happy to open our new doors to our Sri Lankan friends.

Under Secretary Bass said, “The new embassy highlights the important diplomatic relationship between the United States and Sri Lanka and gives the first impression of the United States to many Sri Lankans. It also demonstrates sustainable design, construction, and operations that represent the best of American architecture, engineering, and building standards.

The new embassy is located on the existing and expanded embassy site along the waterfront in central Colombo and provides a secure, modern, sustainable and resilient platform for U.S. diplomacy in Sri Lanka. The architecture and landscape of the new Embassy have been designed to embrace the ecology, history and culture of Sri Lanka and are strongly influenced by the tropical climate of Colombo. Natural stone and domestically sourced wood reference the region’s rich selection of materials in a neutral palette that draws attention to the lush landscape. The interior of the Embassy incorporates textures and patterns inspired by local culture, art and surrounding gardens.

A model of environmental stewardship, the new embassy was designed to reduce energy costs and greenhouse gas emissions while enhancing security and increasing the use of renewable energy. To mitigate the effects of strong sunlight and heavy rain, the new Embassy incorporates weather-resistant materials available in the region, an advanced stormwater management system and, soon, photovoltaic panels that will offset approximately eleven percent of the annual energy consumption of the building. The project is registered with Leadership in Energy and Environmental Design (LEED®) – a global green building certification program that recognizes best building strategies and practices – and is on track to achieve Silver certification.

The new embassy also contains a permanent art collection, curated by the Office of Art in Embassies, which includes art in a variety of media, including painting, photography, textiles and sculpture by American and Sri Lankan artists. Highlights include site-specific bird commissions for Sri Lanka and a mural sculpture depicting the atolls and coral life in the oceans. These works reflect an understanding of the diversity and richness of the ecology and cultural heritage of the United States and Sri Lanka.

The Office of Overseas Construction Operations led the construction of the new embassy. Integrus Architecture of Seattle was the architect for the project, and Caddell Construction Company, LLC of Montgomery, Alabama, built the complex, injecting approximately $90 million into the local economy.

-Embassy of the United States in Colombo

How to upgrade a builder level mirror