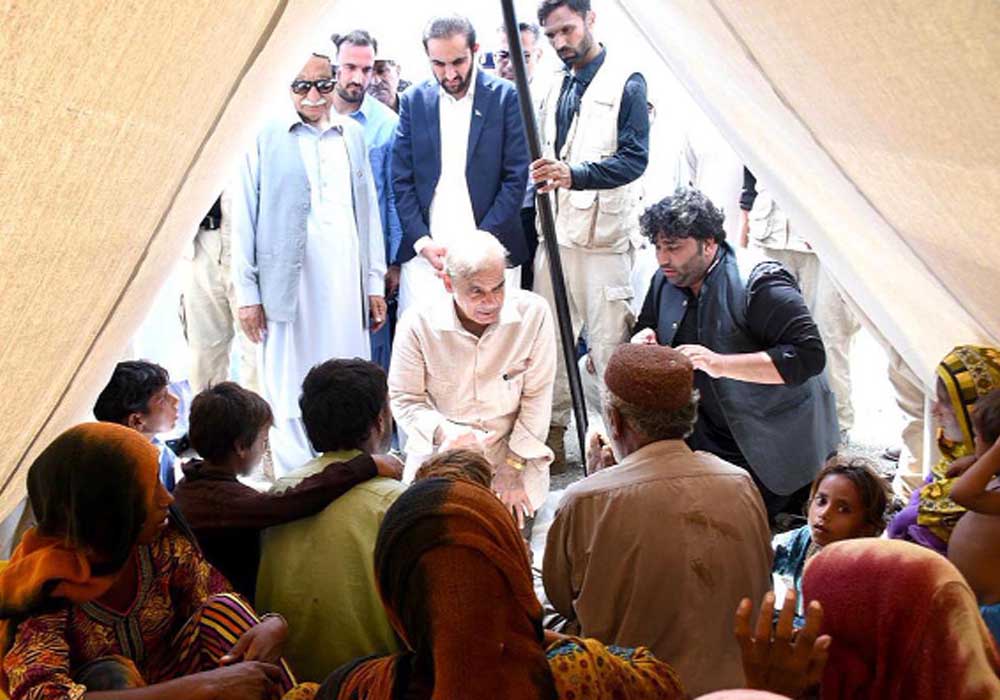 Prime Minister Shehbaz Sharif on Sunday announced a grant of 10 billion rupees for flood-hit Baluchistan to deal with the situation and help victims following recent heavy rains and floods.

The Prime Minister made the announcement during his address to the media during his visit to the province’s Jafferabad district where he reviewed rescue and relief activities for those affected. Prime Minister Shehbaz also said the country has international support with messages of support coming from Turkey, the United Arab Emirates and Britain.

He also revealed that a plane from Turkey carrying supplies for flood victims and another from the United Arab Emirates are expected to land in Karachi and Islamabad respectively.

He said he had a telephone conversation with Turkish President Recep Tayyip Erdogan and United Arab Emirates President Mohammed bin Zayed Al Nahyan, who expressed their immense sorrow at the loss of life and destruction caused by the floods and sent prayers for deceased souls.

Additionally, Britain also announced a two million pound donation for flood relief, he shared. The Prime Minister expressed his gratitude to all countries supporting Pakistan in this time of distress. Prime Minister Shehbaz also once again appealed to the public to help affected families in any way possible. “More than a thousand lives have been lost to the floods, with millions displaced and hundreds of crops completely destroyed,” he said, adding that this was far from the most destructive flood he had ever seen.

“I have no doubt that the 2010 flood was nothing compared to this one,” he said. He commended the efforts of Balochistan CM Mir Abdul Qudoos Bizenjo to come to the aid of the people in the flood-affected areas.

In addition, the Prime Minister referred to the rehabilitation of roads leading to the provincial capital and ordered an immediate resumption to facilitate the relief process. Finally, Prime Minister Shehbaz also addressed his political rivals, telling them to “stop spreading lies and making accusations” in this time of distress. Earlier in the day, Prime Minister Shehbaz arrived in Sukkur, Sindh, to visit the flood-affected Naseerabad Division, Balochistan.

Acting Governor of Balochistan Mir Jan Muhammad Jamali, Chief Minister Abdul Quddus Bizenjo and Chief Secretary Abdul Aziz Aqeeli received the Prime Minister. Prior to his arrival, Prime Minister Shehbaz took an aerial view of the flood-hit areas of Sindh and Balochistan provinces. Later he went to visit the flood affected areas of Jaffarabad district in Balochistan where he reviewed the rescue and relief activities.

According to the details, the prime minister has invited all allied parties, chief ministers of the four provinces and all heads of services to the meeting.

According to reports, the current situation in the county amid flooding and rainfall will be discussed at the meeting. Stakeholders were urged to develop a common strategy to deal with the ongoing calamity.