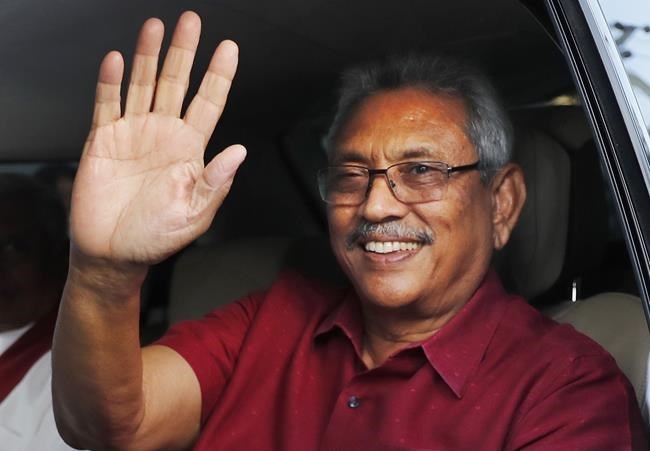 COLOMBO, Sri Lanka (AP) — Former Sri Lankan President Gotabaya Rajapaksa, who fled the country in July after tens of thousands of protesters stormed his home and office in an angry protest over to the country’s economic crisis, is back in the c

COLOMBO, Sri Lanka (AP) – Former Sri Lankan President Gotabaya Rajapaksa, who fled the country in July after tens of thousands of protesters stormed his home and office in an angry protest over to the country’s economic crisis, returned to the country after seven weeks.

Rajapaksa flew to Bandaranaike International Airport in Colombo around midnight on Friday from Bangkok via Singapore. After being greeted by his party lawmakers, Rajapaksa left the airport in a motorcade heavily guarded by armed soldiers and reached a government-owned house attributed to him as a former president, in the center of the capital, Colombo.

On July 13, the ousted leader, his wife and two bodyguards left on an air force plane for the Maldives, before traveling to Singapore from where he officially resigned. He flew to Thailand two weeks later.

Rajapaksa has no outstanding trial or arrest warrant against him. The only court case he faced over alleged corruption while serving as defense ministry secretary under his older brother’s presidency was dropped when he was elected president in 2019 due to constitutional immunity.

For months, Sri Lanka has been grappling with its worst economic crisis, which has sparked extraordinary protests and unprecedented public rage that eventually forced Rajapaksa and his brother, the former prime minister, to resign. The situation in the bankrupt country has been made worse by global factors such as the pandemic and Russia’s invasion of Ukraine, but many hold the once-powerful Rajapaksa family responsible for the country’s gross mismanagement. economy and its tipping into crisis.

The economic collapse has led to months-long shortages of essentials such as fuel, medicine and cooking gas due to a severe shortage of foreign currency. Although the supply of cooking gas has been restored with the support of the World Bank, shortages of fuel, essential medicines and some food items persist.

The island nation has suspended repayment of nearly $7 billion in foreign debt due this year. The country’s total external debt stands at over $51 billion, of which $28 billion must be repaid by 2027.

On Tuesday, President Ranil Wickremesinghe, who took over after Rajapaksa’s resignation, and his administration reached a preliminary deal with the International Monetary Fund for a four-year, $2.9 billion bailout to help the country. to straighten up.

Rajapaksa, a former military officer, was elected on a promise to revive the country’s economy and ensure national security after Islamic State-inspired bombings killed some 270 people in churches and schools. hotels on Easter Sunday 2019. He renounced his US citizenship when he contested the election. because the laws of the time prohibited dual citizens from holding political office.

As a top defense official, he is accused of overseeing human rights abuses by the military during the country’s three-decade civil war with now defeated Tamil rebels who fought for a state independent for the country’s ethnic Tamil minority.

In April, protesters began camping outside the president’s office in the heart of Colombo and chanted “Gota, go home,” a demand for Rajapaksa to step down, which quickly became the movement’s rallying cry.

The protests have dismantled the Rajapaksa family’s grip on politics. Before Rajapaksa resigned, his older brother resigned as Prime Minister and three other close family members left their cabinet posts.

But the country’s new president, Wickremesinghe, has since cracked down on the protests. His first act as leader was to tear down protest tents in the middle of the night as police forcibly removed protesters from the site and attacked them.

There is genuine fear among people who want to protest now, said Bhavani Fonseksa of the independent think tank Center for Policy Alternatives.

“It remains to be seen whether people will take to the streets to demonstrate again, especially since there has been so much repression since Ranil Wickremesinghe came to power. Several protesters have been arrested, so there is real fear,” she said.

Dayan Jayatilleka, a former diplomat and political analyst, said the ruling SLPP party would welcome him back, but did not think his return would cause people to flood the streets again. “They’ll be sour – it’s still far too early for him to come back,” he said.

“There is no way Gotabaya will be forgiven for his transgressions, but I think there is now more bitterness than public rage awaiting him,” Jayatilleka added.

For Nazly Hameem, an organizer who helped lead the protest movement, the return of the former president is not a problem “as long as he is held accountable”.

“He is a Sri Lankan citizen so no one can stop him from coming back. But as someone who wants justice for the corrupt system, I would like action to be taken – there should be justice, they should press charges against him and hold him accountable for what he has done to the country.

“Our slogan was ‘Gota, go home’ – we didn’t expect him to flee, we wanted him to quit. As long as he doesn’t get involved in active politics, it won’t be a problem.