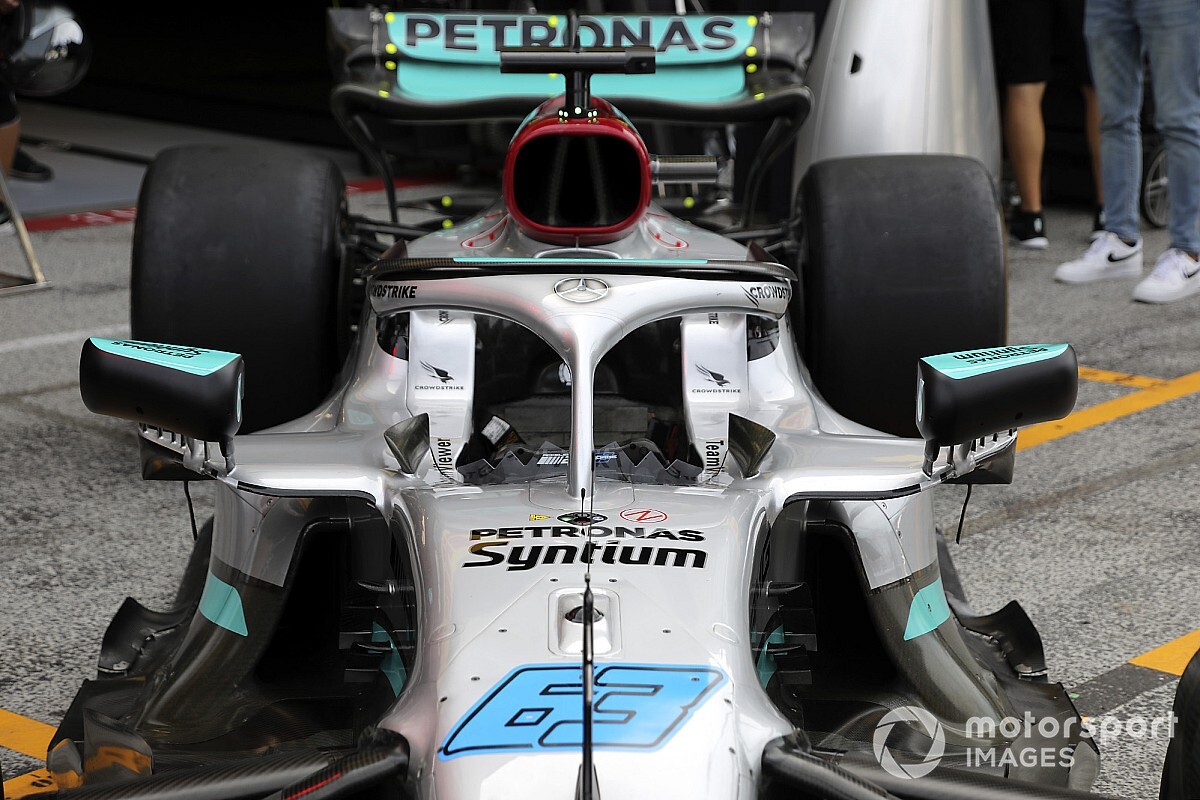 As the centerpiece of a triple-header, the Formula 1 Dutch Grand Prix was always going to deliver very little when it came to actual car upgrades.

Indeed, only four teams have chosen to bring new parts to a circuit which has very different requirements from the two circuits that border it on the program.

But that didn’t stop Friday’s free practice session from providing a bit of technical intrigue, as there was a group test underway on behalf of the FIA.

It followed tests by Red Bull in Hungary and Mercedes in Belgium of larger mirrors, which the governing body is potentially planning to introduce for 2023 and beyond to help improve safety.

Mirrors have long been a problem in F1, with aerodynamicists keen to mitigate their damaging effects, even at the expense of drivers’ ability to see what’s going on around and behind them.

In their quest to remove aerodynamic inefficiencies from mirrors, designers not only decided to have the smallest body possible around the mirror, but they also lent themselves to a trend that uses flow conditioning appendages to also modify the course of airflow. .

As you would expect in a grid test, there was an array of different solutions among the teams as they hoped to glean information for themselves and the FIA.

Alpine has been one of the most proactive teams on the grid this season when it comes to delivering new parts, with the Enstone-based team having something new available at every race of the season so far.

Obviously some of the packages that have arrived have been more substantial than others, but it’s interesting that he’s been able to maintain a steady stream of development that not only takes influence from those who l ‘surround, but has its own design features stamped on it too.

For the Dutch Grand Prix, the team made some optimizations aimed at improving the pre-existing support package they planned to use on this site.

At the front of the car, this resulted in a minimal change to the front wing design, with a new flap introduced to reduce downforce and help balance the car for the imposed changes at the rear.

The beam wing was modified by Alpine at the rear of the car, with a shorter chord upper member used in its biplane-like stacked arrangement.

It should be noted that it had two configurations available so far, medium-high downforce and low downforce. This new arrangement will fit somewhere in between, or perhaps replace the mid-to-high downforce option altogether.

Alpha Tauri targeted the Dutch GP as an opportunity to make improvements to its rear wing, with the Faenza-based team making changes to the transition where the wing elements meet the endplate.

The bow is now much more tightly wrapped, increasing the span of the mainplane and upper flap, with a larger wingtip cutout used to compensate for the extra swirl that might otherwise have ensued.

williams had a new front wing at its disposal for the Dutch Grand Prix, with the team making changes to this area for the first time since its update at Silverstone.

The changes also didn’t require a completely new wing to be manufactured, which is obviously good considering the cost ceiling, with the outer section of the upper flaps and the transition with the designated endplate as a point that could result in improved performance.

This section of the wing is relatively sensitive given the performance compromise that must be accepted between creating downforce with the flaps and using the junction to influence the washout that the wing generates.

Alfa Romeo made changes to its rear brake duct during the Dutch Grand Prix, with the team aiming for a performance increase that would not just be limited to the track characteristics at Zandvoort.

On this occasion, the shape of the deflector was modified, the team anticipating an improvement in local flow performance while offering the secondary benefit of improving flow through the diffuser.

The team fitted a large Kiel probe rake to the rear of the C42 during free practice to ensure the parts performed as their simulations predicted (below).

While the main body of the mirrors is going to be enlarged, it is the consequence of enlarging the reflective surface of the mirror.

The solution presented by Mercedes saw the W13 fitted with a mirror housing that was almost doubled in height compared to its usual solution.

The solution tested by Red Bull is also much taller than we’re used to seeing, with the height nearly doubling as a result.

For comparison, here’s the usual solution Red Bull would use, with the smaller main mirror housing framed by fins at the top and bottom.

This photo is ideal for comparison purposes, as Red Bull has actually chosen to fit both the regular mirrors and the larger ones on either side of the car.

Alpha Tauri chose to widen its mirror assembly rather than increase the height.

Aston Martin probably had the most developed solution on the grid, with the team making a wider version of its usual design, with all the aerodynamic appendages it would usually have.

Ferrari opted for the elongated version of its rearview mirror, but without the vortex generators that are normally found under the assembly.

Alpine’s mirror was a simple extension of the mirror arrangement normally found on the A522.

Williams, meanwhile, opted for a much larger mirror body overall.

The enlarged mirrors used by McLaren meant the team had the usual framing fins.

For comparison, the standard mirror configuration has a smaller body and a fin around it.

Alfa Romeo’s test mirrors have also been extended to make them wider than they usually would be.

The danced journey of Maral Yessayan – The Armenian mirror-spectator

Swimming and scenery await at Mirror Lake Falls in Arkansas