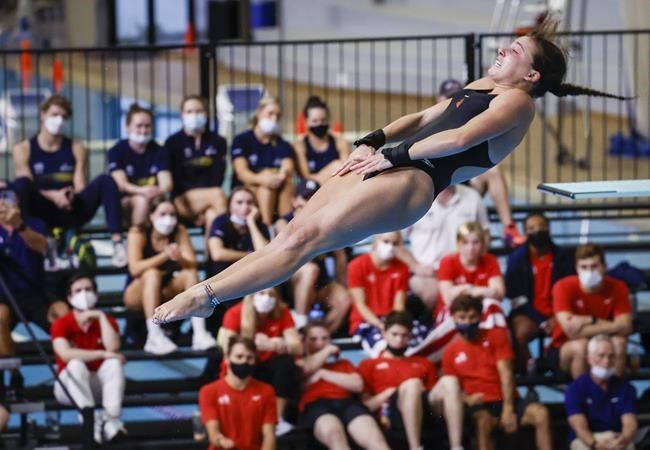 Vallée proves that she belongs to the company of elite divers

CALGARY — After winning gold on Saturday in synchronized diving with teammate Margo Erlam of Saskatoon, Sask., Mia Vallee of Beaconsfield, Que., was hoping to get back on the podium on Sunday in the individual three-metre springboard at the Grand Prix diving FINA — Canada Cup event in Calgary.

After a tight battle with American Sarah Bacon, Vallée had to settle for second place. But you couldn’t say that she was disappointed with this result.

“I am extremely proud of my performance. I was consistent all day, and that’s often the key to success in diving. I made a few small mistakes on my last two dives but I will keep working hard, said Vallée.

After the first three dives, Vallée was at the top of the standings and well ahead of Bacon, her closest competitor. However, the final two dives ultimately decided the outcome as Bacon was clear, scoring 85.25 on his fourth attempt. Vallée came out of the final with 361.25 points, while Bacon took the gold with 359.75.

Vallée’s strong performance at the Canada Cup has boosted her confidence as she heads to the world championships, which begin June 18.

“I know I can compete with the best in the world. I wanted to do well here in Calgary because it was one of the first major meets in a very long time. My results this weekend gave me 100% confidence in myself for the world championships.

Pamela Ware of Montreal finished just behind Vallée on the three-metre springboard, winning the bronze medal with 315.55 points.

On Friday, Rylan Wiens of Saskatoon had a superb performance in the semifinals of the men’s individual 10-metre platform. And the Saskatchewan native delivered again on Sunday in the final, finishing second at 472.60 points, just behind American Joshua Hedberg at 477.95.

“I’m really happy with my performance. There are a few things I’m going to focus on, but overall I’m very happy with my work. Joshua Hedberg was excellent in the final. I’m happy to see him achieve so much success at just 15 years old,” Wiens said.

Australian Cassiel Rousseau, who had been the only diver to beat Wiens in the semifinals, finished third in the final with 465.75 points.

It was an emotional weekend for Wiens, who won gold in synchronized diving with Montreal teammate Nathan Zsombor-Murray on Saturday before claiming silver on Sunday. The 20-year-old is now ready for the world championships.

“It was a great weekend. The chemistry between Nathan and I was great, even though it was our first competition together. I was also able to work on some new jumps. I feel more than ready for worlds I would like to get in the top six in the individual events and win a medal in synchronized diving,” Wiens said.

Matt Cullen of Blainville, Que., also competed in the men’s 10-metre platform final on Sunday. He finished fourth with 450.75 points, having performed well on some dives, including 91.20 points on his first dive of the day.

Earlier, Cullen and teammate Katelyn Fung of London, Ont., competed in the mixed 10-metre synchro event. They scored 243.03 points, which was good enough for second place, behind Brazilians Ingrid Oliveira and Kawan Pereira with 281.76.

This report from The Canadian Press was first published on June 12, 2022

Dive into summer in Historic Grapevine – The Gilmer Mirror