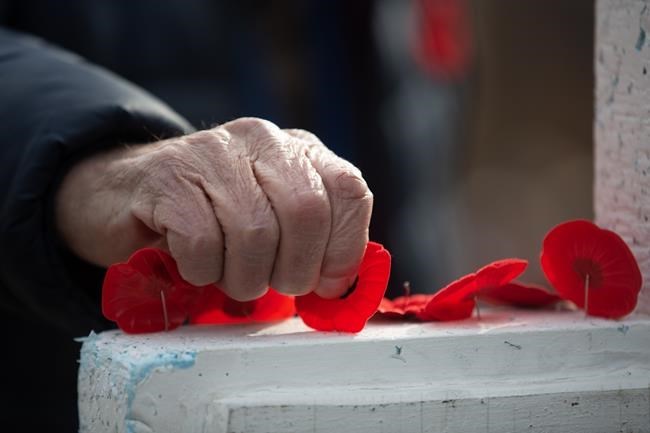 OTTAWA – The war in Ukraine loomed large on Friday as Canadians, most wearing poppies but few with masks, gathered outside cenotaphs and monuments to remember and pay their respects to those who fought and died in the service of the country.

OTTAWA – The war in Ukraine loomed large on Friday as Canadians, most wearing poppies but few with masks, gathered outside cenotaphs and monuments to remember and pay their respects to those who fought and died in the service of the country.

This year’s Remembrance Day ceremonies have seen a return to normal after two years of pandemic-related restrictions that have forced reduced commemorations, with large crowds and veterans returning alongside drums, pipes and traditional guns.

Even as Canadians were asked to remember the sacrifices of past generations, Russia’s invasion of Ukraine underscored fears and uncertainty about a new era of war and conflict — and the need to defend unity and peace.

During a prayer at the National Ceremony in Ottawa, which took place amid unusually warm temperatures for the season, Navy Chaplain Captain Bonita Mason highlighted the war in Ukraine ahead of calling on Canadians to set aside their divisions.

“In a world marked by struggle and instability, where war continues to rage in Ukraine, we come together to affirm our resolve to break down the barriers of division in the spirit of reconciliation,” Mason said.

“We seek dialogue with each other in all areas: social, political and religious. So that in doing so, we will achieve lasting peace. May we all strive to continue our efforts to build a better world.”

Among the veterans in attendance was 93-year-old John Geen, a retired air cadet and army reservist whose father fought in World War I and who also drew parallels between the past and the present.

“It reminds us of what is happening in the world right now, in Ukraine, and how important it is for all these people here to support a system and end this type of one-to-one fighting,” said Geen, who was attending at its first ceremony in Ottawa.

In separate ceremonies in Toronto and Montreal, Ontario Premier Doug Ford and his Quebec counterpart François Legault took note of the Russian invasion of Ukraine, which has been described as the new frontline between democracy and the authoritarianism.

“The illegal Russian-led invasion of the Ukrainian people shows us all the dangers that still exist in this world,” said Ford, who spoke as cannons periodically fired in the distance.

The war in Ukraine is a reminder of the lingering risk of global conflict and the debt to Canadians who chose to don uniform in defense of democracy and freedom, Legault told reporters after laying a wreath in Canada Square.

“We would like this not to happen again, but unfortunately what is happening in Ukraine right now reminds us that we still need these people, and we really have to thank these people who are there for us, to defend democracy,” did he declare. .

“What happened a few months ago really sends a signal to people (that) freedom and democracy don’t come for free,” he said. “We have to protect ourselves. We have to remember that there are people who want to take it away.

“It is a reminder of the true bravery of those who dedicate their lives to the service of our country,” he said in a statement.

Before the start of the national ceremony, dozens of veterans of different ages and backgrounds marched through the streets of Ottawa alongside serving members of the Armed Forces to the sound of drums and bagpipes.

The return of the Veterans’ Parade was a tangible difference from the previous two Remembrance Days, when the march was canceled due to COVID-19 restrictions.

Large crowds have been reported at ceremonies across the country, with retired Air Cadet Marilyn Lawson-Dickinson saying she was “shocked” by the large turnout in Toronto.

“I’m so happy to see so many people here today,” said Lawson-Dickinson, 61, who is also the wife of a veteran. “I haven’t seen it like this here in years. It’s phenomenal.”

While many were focused on Ukraine, Rabbi Idan Scher, during his blessing at the national ceremony, highlighted the sacrifices those who serve in uniform are often asked to make to protect the freedoms of Canadians and called on the country to support its veterans.

“Not just saying thank you, not just supporting our veterans and their families with words, but rather with actions, with our time, with our care and with our resources,” Scher said.

At the National War Memorial, a flag believed to have been carried by a Canadian soldier in Dieppe, France, in August 1942 was displayed to commemorate the 80th anniversary of the raid. A wreath was also laid for Queen Elizabeth II, who died in September.

For many, Friday represented a day of personal reflection. Lloyd and Charlotte Smith, whose son Nathan was one of the first Canadian soldiers to die in Afghanistan when he and three comrades were killed in April 2002, were at Halifax City Hall.

In front of the cenotaph at Toronto’s Old City Hall, Alistair Stark, 73, stood in uniform for the city’s ceremony in remembrance of his father who served in the World War II invasion on D-Day and of his uncle, who was killed in Italy.

In Montreal, retired Lieutenant-Colonel Henry Hall was among those gathered at Place du Canada. Hall was part of a United Nations mission to the Middle East in 1974 when nine comrades died after their plane was shot down.

“It was a tough course,” Hall said. “It was very difficult, one of the guys was a good friend of ours and I obviously miss him and think of him all the time.”

In Vancouver, the rain held back as crowds gathered in Victory Square. Andrew White said he enjoys bringing his children to the annual ceremony because his grandfather served in World War II.

“He was one of those who came back. But when he came back, he was a changed person,” White said. “War is terrible. We come here to remind ourselves why it is important to never go back.

This report from The Canadian Press was first published on November 11, 2022.